Watching a video of Jim Carrey painting, you can see he has a wonderful sense of play and colour, as he creates a range of giant paintings in his warehouse-sized studio.

He bashfully covers a canvas double the size of my bedroom with paint, and he pours thick, luscious acrylic paint from cans in wonderful pink rivers, unconcerned about making a mistake.

‘I like the independence of it, I like the freedom of it.’ he says. ‘No one else tells you what you can or can’t do.’

That liberty is important to creativity. Being able to play and experiment without restraint is often when new ideas and solutions are found.

But Carrey’s unfettered use of materials is a luxury most of the world doesn’t have.

I teach creativity in a community school in a poor barrio on the edge of Puebla city, Mexico. There, we pour the cheap acrylic paint that hasn’t been used back into the bottles from the yogurt lids we mix it in. We can’t throw paint around, unrestrained, because that would be an insane waste.

We use recycled paper and broken brushes, and when we finish, the kids – tired and stressed; many of them will start working full time as informal street food sellers or builders when they turn 14 – play on a rubble-dirt road out the front.

Inequality sees obstacles to creativity built up in two major ways. Firstly, through material poverty; secondly, through under-representation of the cultures of the Majority World, which are taken less seriously and are less visible on the global stage.

Creativity in times of scarcity

For the kids I worked with in Venezuela and now work with here in Mexico, reading and writing can seem irrelevant when they know they’ll start working, or raising children, when they are still teenagers.

During creative classes, they look to the teacher for the ‘right’ answer when asked their opinion, because rather than using their imagination or taking a questioning approach, it seems more efficient to get things done and get the grades. Do the tasks, pay the bills, ‘deal with’ and ‘manage’ life rather than explore and play with it.

Getting the ‘right’ answer, drawing the picture just how the teacher wants it, trying to please others seems a quicker route to some self esteem than thinking outside the box.

Between 2009 and 2014, I worked with an escuelita, an alternative education project in Pueblo Nuevo – a barrio in Merida, Venezuela. We linked schooling directly to community, to learning about life in practice rather than just talking about it, and students were encouraged to be part of classroom decision making.

The kids in this particular barrio lived in poverty and faced daily verbal and physical violence. Most of them had lost family members to gun violence.

I facilitated an activity where kids aged 10 to 14 sat in a circle and told a collective story, each adding a line to the last person’s. One kid, whose mother would disappear for days at a time, leaving him in charge of looking after his younger siblings with no money for food, struggled to think about anything other than his daily problems.

The story was about going to the park but each time it was his turn, his sentence had to do with money. It showed how stress can limit our ability to let our mind wander.

Once, I asked my class in Venezuela to write questions for me or a classmate. The idea was to promote questioning, and to value that process more than the answers. One of the pupils was a 12-year-old girl whose mother had been killed in an explosion in Colombia, and whose father had fled to Venezuela and was struggling to pay the rent on their one-room place. The girl preferred to copy long stories into her text book than do the much shorter exercises I gave her, like writing a few questions.

With low confidence and stress, she sought refuge where there was no danger of failure: tedious, mechanistic tasks.

Creativity is original thought, the ability to imagine a better world, the ability to see the problems in the current one, and therefore it is both rebellious and a vital skill for oppressed peoples.

But the permanent irony of the struggle for a better world is that those who most need to criticise it are those who are actively excluded from public discussion.

Most studies don’t get it

Some studies have tried to apply the idea of the constraint mindset – the idea that limitations force innovation – to people in poverty and to other oppressed groups. They argue that having less options makes people more creative.

While it’s true that restrictions can encourage original combinations (watch me making an incredible raw broccoli salad during food and cooking gas shortages in Venezuela), this argument ignores the social and historical context. When you’re exhausted, when you’re told all your life that your role in society is purely manual labour or child rearing and that your opinion is worth nothing, it is harder to write books.

Academic studies suggest that socio-economic hardships put children in an underprivileged position while learning, too. One study in Science in May 2014 shows that the stress caused by poverty favours habits over creative goal-oriented behaviour.

Ultimately, people who glorify poverty and ‘minimalism’ do so with the luxury of not having those things imposed on them. Meanwhile, such ideologies do nothing to combat the inequalities and lack of dignity most of the world lives with.

A further issue is that the creativity of the Majority World is hardly ever celebrated, or given the chance to shine.

I tallied up numbers for global music awards, museums, literary awards, movie awards, and published books, to compare them across low and high income countries. 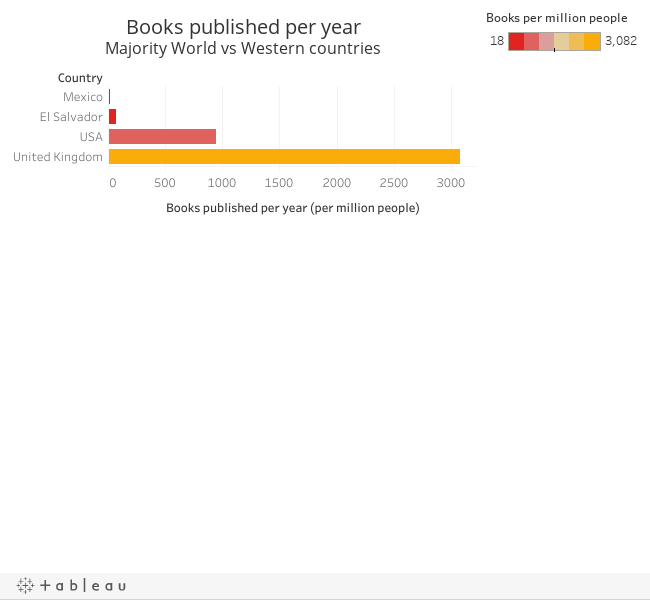 The complete exclusion of some countries, and the massive under-representation of others, means the world misses out on important perspectives, while people in those countries are made to feel that their views, ideas, and cultures are worthless. 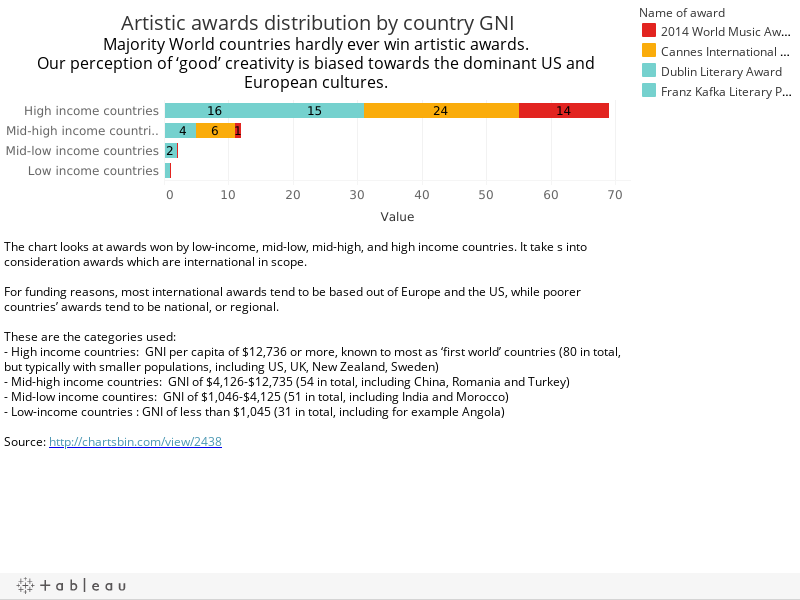 When the poor do art, it is ‘handicrafts’ and ‘traditional music’, but when the wealthy throw paint around, it’s hung in galleries and valued in the millions.

And of course, the exclusion is multifaceted – as there are further inequalities within each of these countries too. For example, in the UK, a 2015 report found that ‘higher’ social groups accounted for 87 per cent of museum visits, while just two of the 22 recipients of the Dublin Literary Award were women.

This too has an impact on people’s perception of their own creativity.

When the vast majority of artists and authors are well-off white males, and the perceived standard musician might be a young, English-speaking female, it is hard to imagine yourself joining that world.

The tragic consequences of denying creativity

None of this is to say that poor and marginalized people are not creative: rather, they face many more hurdles. Then, those who do manage to express themselves in literature, art, or music, are dismissed more quickly. In the media, no one is asking Mexicans and Venezuelans what they think of their local situation or global politics. The media are asking US and UK academics.

Creativity humanises. That whole countries and groups are virtually invisible on the global stage paves the way for their lives to be seen as being worth less.

-By Tamara Pearson: Pearson has a degree in alternative pedagogy from Venezuela, has taught creativity and imagination in schools in Venezuela and Mexico, has been a journalist for 17 years, and is the author of The Butterfly Prison

This article was originally published by New Internationalist.